Semana Santa in Spain lasts for ten days, finishing on Domingo de la Resurrección (Easter Sunday). This year it is taking place from 28th of March till the 4th of April.

In Barcelona, the most important event of Semana Santa is the blessing of the palms on Palm Sunday (Diumenge de Rams), which is the Sunday before Easter.  Traditionally, godmothers present their godchildren with a large palm branch. The palm carried by boys is plain but the palm carried by girls is decorated with ribbons or candy. The palms are taken to mass and blessed by the priest, and then taken home and hung on balconies for the rest of the year to ward off evil.

There is also a procession, known as the Procesión del Domingo de Ramos, which starts at Barcelona´s cathedral, La Catedral de la Seu, directly after the morning mass.

One of the most important spanish culinary traditions takes place on Easter Monday throughout Catalunya. The mona de Pascua is a cake that is given by godfathers to their godchildren, which can be decorated with anything from feathers to eggs. The bakers and confectioners compete with each other to have the best monas, and display them in their windows to attract the attention of the children as they go by. If you want to see some of the best you can check out the bakeries on Rambla Catalunya in Barcelona.

There are also several towns and cities outside of Barcelona that are known for their Semana Santa traditions.

The town of Esparraguera is famous for their theatrical performance of the Passion of Christ. The citizens themselves put on the performance and normally over 700 of them are involved.

The town of Verges, near Girona, is famous for La Dansa de la Mort, the Death Dance, in which two adults and three children dressed as skeletons walk along the streets followed by the sound of a drum. Although this procession has now become synonymous with Holy Week, its routes truly lie in medieval Catalan theatre. Each year the procession takes place the Thursday before Easter Sunday.

The most widely known Semana Santa processions in Catalonia take place in Tarragona. Their most celebrated is called the Processó del Sant Enterrament (The Holy Burial Procession), which takes place on Good Friday. It dates back to 1550 and is considered by some to be the most important Semana Santa celebration in Catalonia. 5,000 people participate, many of whom carry swords and dress as Roman soldiers.

How will you be celebrating Easter this year? We would love to hear from you…

Previous post Own PGA Catalunya’s Stadium Course for a day – yours for €15,000 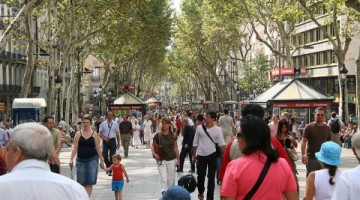