A great day for scoring at the European Tour Qualifying School

At the start of the week there were 156 European Tour hopefuls teeing up at PGA Catalunya with one goal in mind – to secure one of 30 tour cards on offer.

On Thursday that was cut to just 70 as the competition really hotted up with just two rounds to go in the Q School Final.

The morning was perfect for golf, with very little breeze to speak of and a thin layer of cloud ensuring a great opportunity to pick up some birdies. The players did not disappoint with some great golf early on, particularly from Carlos Del Moral, who picked up five birdies on the first seven holes to move into contention.

The Spaniard is clearly enjoying his time at PGA Catalunya as he continued this good early form into the back nine, ending the round 7-under, moving 11 places up the leaderboard to the summit.

Having closed out his round with a birdie three at the 18th he spoke highly of PGA Catalunya’s Stadium Course.

“I always love playing this course,” he said. “We’ve played a lot of tournaments here and the course conditions are always perfect. I came here last week to practice and I was talking with my friends about it, saying it was in great condition for a Tour event.”

Joining Del Moral at the top of the leaderboard going into the final day is England’s Simon Wakefield who shot a 5-under-par 67, before revealing a change of philosophy from the beginning of the week.

“At the start of the week the aim was to finish in the top 30 and make sure I win a Tour card for next season,” he said. “That has now changed, I’m aiming to win this tournament.”

Having spoken to a number of players, the 427m (467 yard) par-4 9th on the Stadium Course is getting a big ‘thumbs up’ as the most popular hole.

Despite sitting joint top of the leaderboard Wakefield has yet to score any better than par at the hole, which he describes as a great risk/reward hole.

“A lot of players really like the ninth, it’s the best hole on the course,” he said. “If can hit a good drive, it gives you great rewards.”

Denmark’s Thomas Norret, who is sitting tied 10th after a round of four-under-par said the hole, was tricky, but great to play.

He said: “The ninth is the best hole on the course. You have to hit two very good shots to get onto the green in regulation, it’s a very nice, testing hole.”

As darkness descended on the PGA Catalunya Resort the place was still a hive of activity as players practiced their putting, warmed down on the practice ground and relaxed with a bite to eat and a drink in the bar.

The final day will see putts missed, hearts broken and stars born as the curtain comes down on another Q School Final.

PGA in the Press: A Place in the Sun Magazine 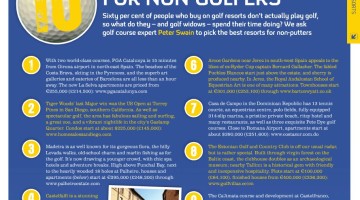